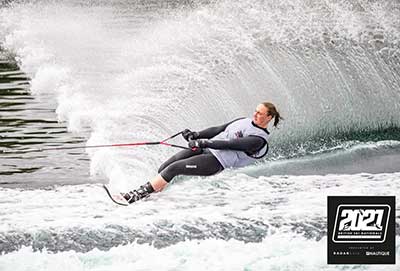 Mid-June brought the RAF Waterski Championships at the Oxford Wakeboard and Waterski Club and an overall 3rd place finish for Tristian. Tristan got involved with the club based at Aboyne after being stationed at RAF Lossiemouth earlier this year. He was pleased with his overall position as well as his discipline finishes of 3rd in Jump, 4th in Trick, 7th in Slalom. but is keen to keep up his training and is hoping to qualify for the Inter-Services Championship in 2022.

You can read more about Tristan’s background and success here: Podium Finish for AWSC’s Tristan Fahey at the RAF Waterski Championships

A few weeks later at the end of June, the UK Cable Wake Park National Championships took place at Liquid Leisure in Windsor. Scotland was well represented, particularly on the female side.

In the Under 14 category Charlotte (Lotte) Docherty who will stay in this category next year took home a brilliant 2nd place with a strong second run in the final.

Orla Winn took part in the Under 18 category at the age of 15 and after a really strong set of qualifying runs just missed out on a medal in the final taking home 4th place and some great learning.

Despite being eligible to remain in the Under 18 category Eve Smith-Lang decided to take part in the Open Female event. Continuing to build on her previous form Eve successfully achieved a gold medal finish with a brilliant first run in the final.

Unfortunately, not many Scottish skiers were able to attend the British National Waterski Championships which were hosted by Oxford Waterski Club between the 12th and 15th of August but that didn’t stop podium finishes from being achieved.

Georgina Hutchison, a member of the Town Loch NTS, took part in the Slalom and Trick events in both the Under 21 and Open Women’s categories during the championships. After strong performances in the preliminary round in all of her events, Georgina kicked off the finals programme on Saturday morning with the Open Women’s Trick competition and a 5th place finish.

That afternoon brought both Slalom finals with the Under 21 competition up first. Showing great consistency across the rounds she took home a silver medal with a score of 4 buoys at 13m (55kph) setting her up well for the Open Women’s Final to come later that afternoon.

After a short break, Georgina was back on the water and continuing to demonstrate the great consistency with which she skis in the Under 21 Trick Final. She put together another great score identical to that which she achieved in the preliminary round and achieved another brilliant 2nd place finish.

Rounding off a busy day of competition was the Open Women’s Slalom Final. Georgina put together some more great Slalom runs managing to outdo her performance in the Under 21s event achieving a score of 1 buoy at 12m (55kph) equal to her Personal Best set in 2016. This brilliant achievement brought Georgina her final trip to the podium where she collected her third silver medal of the championships!